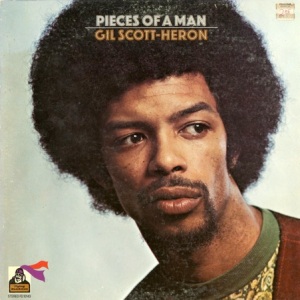 Yeah, I know…a little late with this one. In fact, I am a bit ashamed of myself for not posting something earlier. I mean, not that this wasn’t reported virtually everywhere. (Okay, I am assuming it didn’t receive much play on Fox News…). But I must say that I was a bit surprised at how many outlets I came across that referenced his passing. At that was kinda cool.

I find “Pieces Of A Dream” one of the most powerful collection of songs ever committed to vinyl, including a full-band re-recording of the classic “The Revolution Will Not Be Televised”, which was actually the B-Side to “Home Is Where The Hatred Is”, also featured on this record. Was there a more intense 7″ single? Maybe, tho kind doubtful. Absolutely killer band to boot, with longtime collaborator Brian Jackson on piano, Ron Carter on bass, guitarist Burt Jones, Hubert Laws on reeds and the legendary Bernard “Pretty” Purdie on the drums. Recorded in two days. How punk rock is that.

So, this is not a sales pitch. I picked this up a week before his death. There was a local Craigslist posting for a box of jazz and a box of 70’s/80’s stuff for, well, not a lot of money. Which was good, as most of the 70’s/80’s stuff was pretty beat. But there were some nice titles in that box of jazz, which a neighbor had left for this guy when she moved away. And a bunch of ’em still have the original Pellucidar price tag on ’em, including this “Pieces Of A Dream” record. $2.25 back in 1971! (BTW, Pelluicdar was a bookstore in Berkeley, evolved into Pendragon, which evolved into its current incarnation, Pegasus. At least, I think that’s the deal).

More than anything, just wanted to get  scan of this up, as it’s a classic and this copy is the original Flying Dutchman gatefold issue. Have yet to play it as I am awaiting a new cartridge to arrive later in the week (as my current one has been, uh, troublesome). I can see the record has received quite a bit of turntable action of the past 40 years. As well it should. And it will be the first thing I spin when I have the table back up and running.