No Easy Way Down: The Return Of Rain Parade 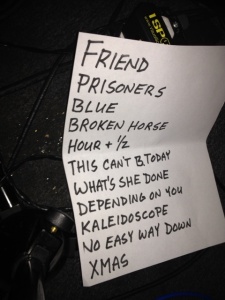 I’m honestly not sure how it all started. The way I reference things, I suppose it began with the Blurt Online news piece last June that mentioned Bobby Sutliffe, one-half of the great on-again, off-again southern jangle pop duo The Windbreakers, was involved in a super nasty auto accident that left him in a very messed-up state – “broken wrists, broken back, and a head injury.” And likely some other stuff as well. (As far as I know, the recovery continues and I just read something today that leads me to believe that Sutliffe may actually be involved in his own tribute/benefit show later this month. If that’s true, that’s righteous.)

Fast forward to this past September and a new Blurt entry – not only was there a benefit record in works (spear-headed by *other* Windbreaker Tim Lee), there was also a benefit concert being organized for January 19th (as in two weeks from now) at The Earl in Atlanta. And, seemingly out of nowhere, this – the show would be headlined by long-dormant Paisley Undergrounders Rain Parade, which would make it the band’s first live show in more than 25 years. I remember reading that and thinking “uh, what?” Rain Parade? Really? Knowing how these kinda scenarios can sometimes break, I immediately wondered if Rain Parade was “Rain Parade.”

Well, Rain Parade is indeed Rain Parade. Close enough, anyway. I mean you really didn’t expect David Roback to return, did you? Good. Founding members Steven Roback and Matt Piucci are still there, as is guitarist John Thoman, who came on board just after the band issued the “Explosions In The Glass Palace” EP. The group is currently rounded out by music historian/reissue producer/musician Alec Palao, handling keyboard and maracas duties (as well as some occasional bass), and Game Theory’s Gil Ray, who can now be found behind the drum kit. Oh, and there was another dude whose name I can’t recall. Or find. Sorry, man. You were good, and I did like your hair.

As it now turns out, that January gig in Atlanta will not be the band’s first in 25 years. No, that “first gig” took place a few weeks ago in a very low-key warm-up show at Cafe DuNord in San Francisco (where the band is now based). It was probably a month or so ago when I was checking out some upcoming Bay Area shows that I ran across a gig listing for a semi-obscure 60’s-era Bay Area-based mod-pop band, Powder. The Bang was noted as opening, and then, listed below them as “special guest” was Rain Parade. Hmmm. A couple weeks later Rain Parade was moved up to the middle slot and accompanying text referenced that the band would be performing “Explosions In The Glass Palace” in its (twenty-something-minute) entirety, along with some other stuff. Okay, it’s on. And I’m in.

A quick preface regarding the bands bookending Rain Parade. The Bang is a girl-group tribute thing. Lots of covers. Lots of scripted girl-group moves. I’m sure you can envision what transpired. Although your version probably didn’t have a dude on guitar that nailed the whole 60’s garage fuzz thing. Yeah, he had pedals and he wasn’t afraid to use them. The lazy shorthand on Powder is an Americanized version of the Pretty Things. But you know, without all that great music. That said, they were good. Very good, even. Oh yeah, and they used to be Sonny & Cher’s band back in the day. No shit. So yeah, they’re cool. And apparently recording a new record.

Rain Parade opened with “You Are My Friend,” and proceeded – in order – through the first four tracks off the five-song Explosions… EP. (Hey…what happened to “No Easy Way Down?”) The band then backed up an album, knocking off three songs from Emergency Third Rail Power Trip – “1 Hour 1/2 Ago,” “This Can’t Be Today” and “What She’s Done To Your Mind.” The last quarter of the set bounced all over the place – from Crashing Dream favorite “Depending On You” to Emergency’s “Kaleidoscope” before ending with an epic, wait for it, “No Easy Way Down.” Oh, it’s not over? The band returned for a brief Piucci Christmas original before calling it a reunion.

So, how did it sound? Well, generally, pretty damn good. If there was something to nitpick over, it would be the vocals. But rare is the vocalist that can still sing with the range and dynamics he/she did 25 years ago. And it’s not certainly not like Rain Parade was ever lauded for its vocals. Musically, I thought it sounded pretty spot-on. I love the guitars. (Cue Homer-ish drool) When Piucci and Thoman go on one of their many extended duel jams, it was as warm and fuzzy as you would hope it tobe. But those Roback-voiced washes of dream-pop provided a nice counterpoint to the Horse-y groove. Oh, and Ray kills it on the drums.

The beauty of living in 2013 is that you can actually hear AND see that entire Rain Parade set on youtube. And the quality doesn’t suck. Just search Rain Parade 12/20/12 and there you have it. If nothing else, watch “No Easy Way Down” over here.