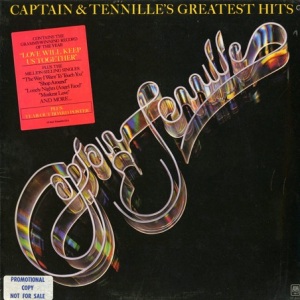 Yes, it’s true. I really am attempting to alienate the three people who actually read this on a, well, semi-regular basis. Honestly, I’m still jammed up with learning curves (spent yesterday with my head buried in Quickbooks, and may be spending most of today there as well) and I’ve got to get a few things packed up and out the door, so I chose a title that I didn’t have to think about a whole lot. And no, that is not a diss.

It’s somewhat mind-boggling on how big Daryl and Toni were back in the day. I mean, stupid big. Bigger than, say, Ke$ha. And I barely know who Ke$ha is (but I apparently know that there is a dollar sign in her name…go figure). But hey, Captain And Tennille were way, way better than Ke$ha. And you can judge that by either the quality of the music or sales figures. C & T kick her ass on both levels. And Toni Tennille didn’t have the benefit of auto-tune!

Anyway, not to dwell on this for too long, but the band sold tons of records. “Love Will Keep Us Together” alone sold over 1.5 million copies. And there were several follow-up singles that also sold in excess of a million copies. They were so big they even had their own (short-lived) tv show. That said, Sonny & Cher they weren’t.

So, I have  sealed copy of this 70’s jewel. First, there’s the gatefold jacket – essential for the 70’s teen, and handy if you misplaced your copy of Yes’ “Tales From Topographic Oceans.” (Personally, given the choice of listening to either album, I’m opting for the confectionary leanings of C&T over the meandering indulgences of Yes, but if you decide to use that jacket for rolling purposes, just know you’ll be looking at a shirtless Daryl Dragon.) Other built-in features of this fine collection are a very large custom sticker letting you know that all those songs you wanted to hear (all killer, no filler!) are enlosed within, as is a “tear-out board poster”.  And finally, the small cut-out-hole on the top right corner and the promo sticker on the bottom left would lead me to believe this is a white label promo. Word!

Okay, there you have it. While Don Kirshner didn’t have anything to do with this particular piece of bubblegum, he did once have Neil Sedaka under contract as a writer and Sedaka did pen several of the group’s biggest hits, including that “Love Will Keep Us Together” gem. BTW, I’d also opt to listen to C&T over Kansas. Just sayin’.