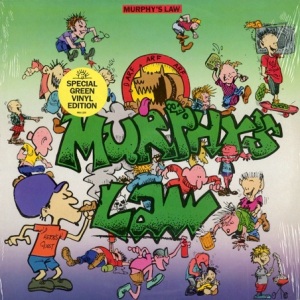 1986 was a pretty big year for Rock Hotel Records, a NY-based indie label who loved mixing their punk with their metal. I mean, just off the top of my head (which this early in the morning is fairly admirable, I must say), they released the debuts from Cro-Mags, Wargasm and Murphy’s Law. Now, the former two definitely had more of a metallic bent musically as well as a dark, somewhat intimidating physical presence whereas Murphy’s Law just came off as a bunch of beer-swilling, weed-smoking, politically incorrect louts (all of which was likely true). But they, I’ll never fault anyone for having a great time whilst rocking, and Murphy’s Law definitely embraced both. I mean, the cartoony jacket alone pretty much says it all, including the custom sticker that notes this is the original green vinyl pressing, as well as the back cover shot featuring Jimmy Gestapo in a Judge Dread T-shirt. Judge Dread ruled in the mid 80’s. Literally. Well, literally if you were a comics fan.

Anyhoo, while this green vinyl pressing isn’t considered “rare”, it is pretty scarce. And when it comes to a sealed copy, rare might be fair. This is available on Musicstack and Gemm for $50. Arguably a twee high, but again, it is sealed and the jacket is in pretty sweet shape. That said, if you want it for $40, just drop me a line – graypunk@mac.com – and it shall be yours. (Wasn’t dead sure “yours” was even a proper word, but I can know assure you it is).