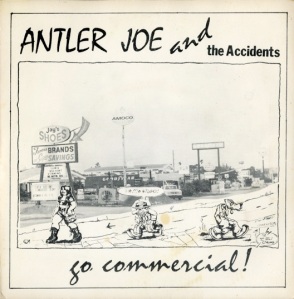 All the way back in the 70’s (okay, it was the very early 80’s, but I desperately wanted to riff on the Wilco lyric), I was in pre-dawn of my music retail “career”, serving as, ahem, assistant manager at the Record Bar in the Edison Mall in Ft Myers, FL. (So, Thomas Edison, the guy who invented the light bulb, the movie projector and – most importantly – the phonograph – lived in Ft. Myers, which is more or less the city’s lone claim to fame). Dude, it was 1981, I was 20, living away from home, an assistant manager for a high-volume record store and probably living one short rung above the poverty line. It was awesome.

Well, there is one other thing that Ft. Myers is semi-famous for (outside of having a beach) – this Antler Joe & The Accidents single. I was semi-stunned recently when I stumbled across an eBay listing for this, where at the time it was currently sitting at somewhere around $400 and still had a few days before ending. I was fully stunned when it closed at $680! F’n no way.

Now, my copy is not as nice as the copy I just referenced. But I then find out this 7″, which doesn’t come up for auction all that often, hasn’t closed for less than $500. Ummm…okay, where is my copy?

“Go Commercial” was the band’s one and only release. Hand-numbered in an edition of 500. Supposedly. (In the listing for the copy that just recently sold, it was mentioned that a bunch of copies were trashed by the band’s guitarist, Mike Daly, and as a result, there are far less than that in circulation). A truly DIY project as those yellow spots on the R Crumb-appropriated cover are from the glue the band used to put these sleeves together! Three songs steeped in adolescent bitterness and rage, the basis for so much great punk rock. But you didn’t find many punk rock bands back in the day-or since then-incorporating saxophone into their lexicon, and that sax careens all over the A-Side, the super poppy and very Dollsy “Who Needs A Woman Like You”. The B-Sides – “Words” and “Dogsh*t” don’t pack quite the punch of “Who Needs…”, but both keep the vibe in the same gutter. (The “special thanx for inspiration” shout-outs to J. Lydon, The Glimmer Twins, NY Dolls and JJ Osterburg” pretty much tell you everything you need to know about this lost-and occasionally found-nugget of FLA punk.

I got this from the singer – John Keane (aka Abdul, aka Fish). Fish was already working at the Edison Mall Record Bar when I was transferred there from the third ring of hell – Leesburg, FL. About a year after I arrived, I took over the store and Fish became my assistant. To this day, one of the sweetest men I have ever known. And pretty genius, in many ways. Dude, sorry I’m selling this!