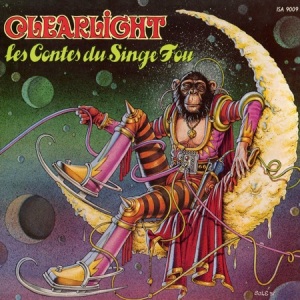 Howdy folks…posted a couple of dozen new titles  last night to Musicstack and Gemm (and a handful of ’em on Discogs. Outside of one sealed private press 12″ (4-3-1’s “Animal” on Recovery Records outta Dallas, TX), all are full-length LP titles, with the following highlights…

Clearlight – Les Contes Du Singe Fou LP (Isadora Records; ISA 9009)…Beautiful and very scarce original French gatefold pressing from this French outfit. Well, not really an outfit per se, but rather Cyrille Verdeaux and whoever he’s working with on any given record. This particular record features contributions from Ian Bellamy and is considered the most psychedelic of Clearlight’s releases. Hey, props to allmusic.com, as I wouldn’t have known any of this. Why? Dude, it’s prog. I don’t do prog. Well, not this kind, not that there’s anything wrong with symphonic prog. (Okay, yes there is). Anyway, a super nice copy; $75.

Teardrop Explodes – Kilimanjaro LP (Mercury Records; SRM-1-4016)…Two words – Julian Cope. Sealed psych-pop from 1980. Ironically, I heard an Echo & The Bunnymen song came on the store within minutes of me running across this record. $25.

Ghost – Temple Stone LP (Drag City; DC 129)…I’ve gottta believe Cope is a pretty big fan of this famed Japanese psych band. Sealed copy of this 1997 live release, presumably on transparent green vinyl. I’m pretty sure there was only one pressing and it was the colored vinyl. But…I cannot swear that is the case. But again, pretty sure. $60.

Doug Snyder – The Conversation LP (New Frontiers 2)…Rare private press out of Yellow Springs, Ohio (then home-and maybe still is-to Doug Snyder). Never heard of this or his record(s), but it’s pretty damn good. Mostly outsider instrumental stuff, and the closest and laziest comparison I can come up with is R. Stevie Moore. Lo-fi, adventurous and great stuff. Record and jacket are VG+, and the record is helped by being pressed on Quiex vinyl. A twee bit of surface noise in spots, a couple of pops on side one, but generally plays incredibly well. And again, very hard to turn up. $25.

Sonic Bullets LP (Realistic; P 15850)…1981 half-speed mastered comp from Columbia Special Products and distributed exclusively thru Radio Shack. So, what I *think* this was intended to be was a primer for Columbia’s audiophile “Mastersound” series as there is an “Introducing The CBS Mastersound Series” insert included). Artists featured include Boston, Journey, Santana, Cheap Trick, Earth Wind & Fire and a handful of other 70’s faves. Jacket is VG+, vinyl is gorgeous; $20.