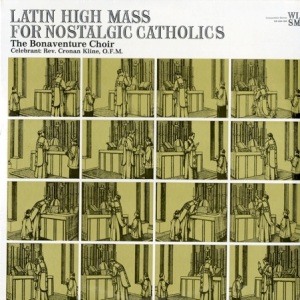 Close to 20 years ago, I married a nice Catholic girl. Check that, I married a Catholic girl. (I mean, she is very nice, but when you actually hear the words “nice Catholic girl”, I believe it carries certain connotations that aren’t necessarily applicable to my wife). And yeah, okay, she’s a lapsed Catholic. That is, she’s as Catholic as I am Southern Baptist (which I am, er, was…it’s been a while, but since I was once baptized, I may be a Baptist for life, though not really sure how that works). And my brother, who was also raised Baptist, converted to Catholicism. So, all I can really say about the religion is that I know some people who are Catholic. Oh, and that Catholic weddings are the longest weddings ever.

Ugh. I’ll be hearing about this later, but I’m not going back and changing that last paragraph at this point. Anyway, I stumbled across a sealed copy of this record recently and I just had to buy it. The one thing that truly fascinates me about many organized religions is the accompanying ritual. And the Catholics can definitely get their ritual on. And while I believe the rituals on display here are a bit outdated, it truly is a little piece of history, a contextualization of the service as it was back in the day.

From the back jacket of the album…

“Catholics on both sides of the generation gap are longing to hear how the Latin High Mass used to sound. This album, in fact, was produced in response to increasing requests for such a record. It is a beautiful and authentic rendition of a complete High Mass with Propers sung in Gregorian Chant, and the Mass Ordinary in Polyphony. This album is not intended to appeal solely to wistful longings for a bygone age, nor is it meant to disparage in the least the older liturgy that requires periodic reform in a changing society. Rather, this record is presented with a deep reverence for the past and for the tradition from which alone can evolve a renewed spirit of liturgy and worship.”

And let it be known that, in light of previous instances of sarcasm found here, it is not my intent here to disparage anything or anyone. As someone who spent a great deal of his formative years (like, from ages 0 to 16) in church, and one whose mother and siblings are all deeply religious, it is not my goal to offend. I’m just here to enlighten. That’s not true. I’m just here to, ummm, turn a profit.

By the way, pretty cool illustrations on the jacket, reproduced from a 1937 text – New Roman Missal, by Father Lasance.