Should It Stay Or Should It Go: Imperial Drag CD 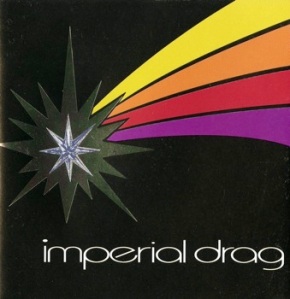 I have thousands upon thousands of CD’s. And one of the many things I hope to accomplish in 2011 is to dramatically pare down my compact disc collection. I mean, once there’s music in the sky, why would I need all these non-recyclable silver discs ? Well, let’s say I need to keep a thousand of ’em. That leaves me room to retain stuff that I’ll (likely) never be able to stream and some stuff that I just can’t emotionally part with. Regardless, it still leaves me with, oh, 7 or 8000 discs that I need to whittle down to, ummm, considerably less than that number.

So, in an effort to entertain myself (and maybe you), I will occasionally pull out a piece of music that I haven’t listed to in, oh, probably a good ten years (or longer) and make a decision as to whether said CD is worthy of retention. Or, even owning in the first place. Yes, the vast majority of my collection came at no cost to me. Twenty-five years in music retail, and having been there at the dawn of digital, I accumulated a lot of music. But seriously, I was selective. I could easily have a storage locker or two filled with music. And I know people who do. Okay, I know one guy who does…and he knows who he is.

Today’s contestant – Imperial Drag. Who, you ask?  Yeah, a perfectly legitimate question. Imperial Drag was one of a few projects begat as a result of the dissolution of Jellyfish. (A moment of silence, please) Seriously, the reverence this band has cultivated over the years is admittedly borders on the freakish. But hey, I love both of those records. Different bands. Different records. Different reasons. But in my book, both achieve a higher pop calling.

Imperial Drag? Not so much. This band is basically Roger Manning’s baby. (Though it should be noted that vocalist Eric Dover toured as Jellyfish’ second guitarist at one point). And hey, I’m typically cool with Roger Manning affairs. I just don’t think this one ever, uh, coalesced. Strike one – Dover. Can he sing? Yes. Does he look good? Yes? Does he possess any discernible pop craftsmanship beyond those two qualities. Ummmm….not really? He had certainly proven by then he couldn’t write a song and lacked any innate charisma, as evidenced by his previous gig fronting Slash’s Snakepit. Note to any band backing Slash – he plays guitar. And he plays it very well. He doesn’t write songs. Sadly, neither did anyone else in his Snakepit.

Imperial Drag suffers from the same problem. Namely, boredom. Dull songs framed in unimaginative rock cliches, this time with faux funk leanings. Just not a lot that you could deem as memorable. I kinda liked the faux-Brian Mayish guitar work in “Salvation Army Band” and I actually dig the faux acoustic blues of the following track, “Dandelion.” But that is also is the over-riding problem here – everything is faux something.

But Kevin, you ask – what is not faux about Jellyfish? Nothing, I suppose. But the one thing that elevates Jellyfish beyond the silliness are songs. And all that really matters are the songs. And Jellyfish had a load of ’em. And Imperial drag did not. Strike all the poses you like (and as a fan of a good pose, I’ll look at ’em all), but if you don’t have songs, bugger off.

So okay, Imperial Drag – you are hereby on notice. You’re going. The only decision left is what to do with that one dollar that this CD is legitimately worth on eBay. It would almost be worth more as parts. That was, if the jewel case wasn’t broken.