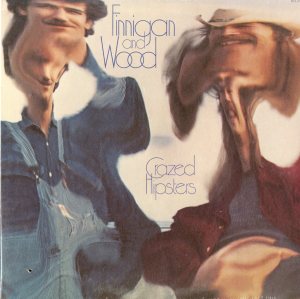 I know it seems like I type this often, but once again here’s another one that I don’t, well, know much about. Pretty close to nothing. The problem with sealed records, especially those that were never released on CD, or were so fleetingly, is that one is at a loss to convey some kinda feel for what the music actually sounds like. And those who talk about Spotify (or any other music service, really) being a great reason to dump your music collection are apparently not deep listeners. Deep as in catalog, that is. Anytime I go looking for some obscure record to listen to, it is invariably, ummm, unlistenable. Because it remains one step short of unavailable.  The only way to source thousands of pieces of music is via vinyl. Or someone’s terrible rip on a file-sharing site. Pass.

“Crazed Hipsters” was Finnigan and Wood’s lone release. I understand they recorded another album’s worth of material, but it was never released. This record is considered by some folks to be one of those fell-between-the-cracks lost classics, a Muscle Shoals moved west kinda ambience. (Interestingly, a few years later, Jerry Wexler approached Finnigan about cutting a solo record, which they did, at Muscle Shoals). Country? Check. Rock? Check. Soul? Check. Throw in a little folk, some blues, a touch of pysch, stir and listen.

Just about anything one can dig up on this record relates to Finnigan, as he managed to carve out a nice niche for himself as an organ player (primarily Hammond, natch) and background vocalist, including a gig that found him playing organ on two tracks for Hendrix’ “Electric Ladyland” release. That musta been a pretty sweet session. After that was a stint in the Jerry Hahn Brotherhood, with the band’s jazz-fusiony 1972 self-titled record dropping long before the term “fusion” was even being bandied about.

Which then leads to “Crazed Hipsters”. You know, the album I have for sale for which I know very little. And if you have any ability to fill in the blanks, feel free to do so in the comments section. Please?! I will say this – it’s a really nice copy. Original gatefold with a tiny pin-sized cut-out-hole through the bottom left corner of the jacket. Touch of rubbing (1″) on the top left spine corner. Outside of that, way nice. $50.