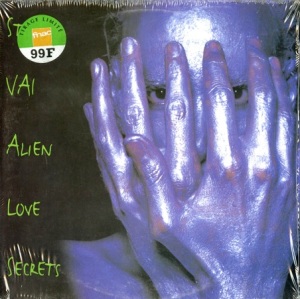 Guitarists don’t come more technically proficient than Steve Vai. Dude can play. I mean, anybody that can keep pace with Zappa for five years has got to be one helluva player. Sadly, after Zappa, he spent the latter half of the 80’s taking on assignments from Alcatrazz, David Lee Roth and Whitesnake. Woof. Hey, I’m sure he walked away with a guitar case full of cash during those years, which I suppose allowed him to follow the solo instrumental path that was initially formulated in the year between his Zappa stint and his subsequent 80’s metal years, issuing the revered “Flex-Able” in 1984.

Right around the time he played on Whitesnake’s last big record, “Slip Of The Tongue”, he also issued “Passion & Warfare”, a hugely successful album in light of the fact that it was instrumental. And it seemingly opened a door for Vai as the final nails were being driven into hair rock’s coffin at this point and Vai’s work up to this point had provided him a pretty wide audience. However, Vai, for whatever reasons, felt compelled to assemble a band and make a hard rock record. The result – “Sex & Religion” – was terrible. At least Whitesnake had songs. And a real singer. Issued over a year after Nirvana’s “Nevermind”, which is widely regarded as THE final death knell for metal, it was an odd, and ill conceived, move.

Which brings us to 1995’s “Alien Love Secrets”. A return to his strength and the only reason folks bought a Vai record in the first place – to hear him play guitar. I don’t know if “quiet” is an appropriate reference, but the record definitely tones the guitar wankiness down a notch, though still has its share of ripping Vai moments. And this being the mid 90’s, a decade that didn’t see a whole lot of artists being granted vinyl releases, “Alien Love Secrets” was only issued in a small French pressing on Relativity.

I purchased this sealed, which typically indicated that a US importer sealed it for distribution in the states as European labels rarely issued records in shrink wrap. Due to the fact that I noticed some super light seam wear on the bottom spine, I felt I should open the item to ensure what I hoped to be its, ummm, mintiness. I was not disappointed as a never-played record resided inside the jacket.

So…unplayed record inside shrink-wrapped jacket with removable sticker on jacket under shrink. Shrink is a twee snug, but did not result in any issues with the vinyl. (BTW, anything in regards to the above scan that appears as wear is isolated to the shrink; no wear issues whatsoever to actual jacket). This is a tough record to track down, as I only see three eBay sales in all of 2011 and they all occurred in early in the year. $60.