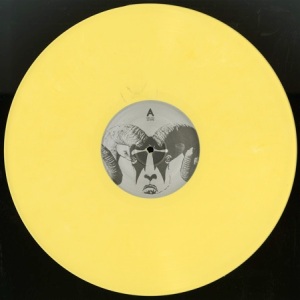 Every record shopping trip I undertake eventually results in new knowledge. I am always buying stuff – for resale – that I honestly have no idea what it is that I am actually purchasing. Okay, “no idea” is a twee stretch. I mean, I do know a little sumthin’ sumthin’, so if I am buying a record on GSL, I would have to guess that the possibility exists that it’s gonna be a bit “out there”. Out there as in, beyond the melodic pale.

This is indeed the case with An Albatross, a Philadelphia-based band that occupies a unique corner in the “noise rock” ghetto. Or maybe it’s just a tiny house in a very small neighborhood. I do know this – I can’t seem to find a review that can hang a referenceable descriptor on this band. They like noise. And they like beats. But they make just about every noise, grindcore, experimental or avant whatever entity seem downright top forty fodder.

The best paragraph I could dig up was from a piece written by Steve Carlson at blogcritics.org back when the record was released in 2006…

“Summing up the music of An Albatross is like trying to describe exactly what happened when the police took those batons to your head – flickers of impressions can be divined, but the whole picture is strangely elusive. Rather than breaking it down into components, all that can be described is the total experience. So when I say that the band’s new album Blessphemy (Of the Peace-Beast Feastgiver and the Bear Warp Kumite) is the most bracing shot of aggravated chaos I’ve heard all year, I mean just that. And when I say that An Albatross plays the best damn synth/noise/dance/grind music you’ll ever hear, I also mean just that.”

Oh yeah, the full title of the album – “Blessphemy (Of The Peace-Beast Feastgiver and the Bear Warp Kumite)”. Man. How did they squeeze that on the spine of a CD? Whenever I see a title that long, I am always gonna assume it’s a prog thing. Or, these days, a prog metal thing. Either way, likely not my thing. Throw dance beats in there and I’m almost positive it’s not my thing.

But hey, maybe it’s your thing. This record was sealed when I bought it. But, after doing a little research, I discovered that there is more than one color variation (of course!…I must stop buying sealed indie punk/metal/noise records as there is invariably more than one version, and in some cases, a handful). Sealed records available in multiple colorways are, ummm, troublesome. (I’m looking at you, Misfits!) Of course someone wants to know which version it is, therefore requiring the opening of said item for sale. And I hate opening sealed records to find out that kinda stuff. The worse is when you open it up and find out it’s actually black vinyl. Unless, of course, there’s only 100 copies on black wax.