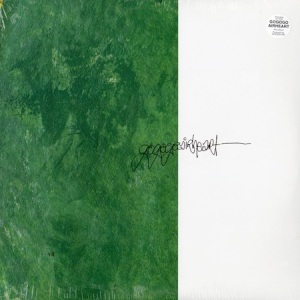 So today has mysteriously morphed into Gold Standard Laboratories day. Total accident. I had some recently purchased records sitting in a stack to file, and this one was sitting behind the An Albatross record that I just posted. I picked both up from the same store, which must have had a GSL fanbase back in the middle aughts.

This was a belated 2003 vinyl release from San Diego’s Gogogo Airheart, the compact disc of which was released by Vinyl Communications in 1997. GSL reissued the band’s first two records in, I believe, in 2003. The band broke up a few years later. And I missed all of it. And I suppose I will continue to be uniformed as there are only a smattering of Gogogo compilation tracks on Spotify, and I doubt the band’s cover of Queen’s “Death On Two Legs” is representative of their original work. If it is, then they’re okay by me. Shambolic as hell, but shambolic is typically one of my favorite qualities in a band.

If I am to believe Pitchfork (and I rarely do), it’s a post-punk/art-punk thing. Okay, I can believe that. They also apparently love the dub. Oh, those crazy indie kids. And If I am to believe allmusic (and that depends on who’s writing), they dabble in “angular, danceable art-punk”. Hey, I think we have a quorum.

Again, vinyl-only reissue of the band’s debut. Pitchfork mentioned that the vinyl version dropped several tracks from the original, referring to that as a “marked improvement” over the original. This feeds right into my belief that anyone making an album should hire an editor, in an effort to minimize anyone’s exposure to artistic indulgences. (That need to fill up an entire CD with music has always been a huge downside of the format; if a 30-minute disc is good enough for Jesus & Mary Chain and Van Halen, well then…).

Sorry, I keep distracting myself. This is sealed. This is hard to find. This is produced by some dude named Spacewurm (I assume it’s a dude, any female has way better sense than to call herself “Spacewurm”). But Spacewurm brings the (ambient) noise. It has a different cover than the original CD release. And we already mentioned the different track listing. So, there ya have it. $35.